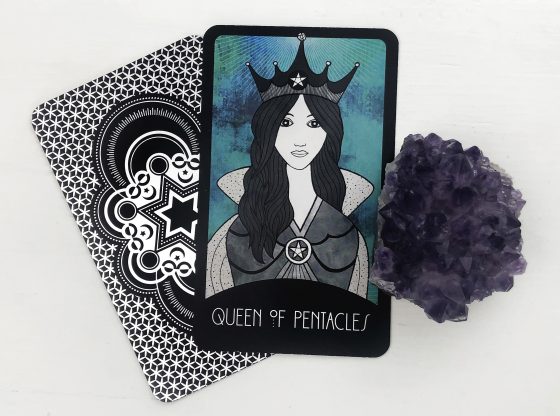 The Queen of Pentacles reversed is one of those cards that can have multiple interpretations based on its location in a spread and the question you’ve asked, but each interpretation is fairly straightforward. Whether the Queen refers to you or another person, you’ve got some mothering and material issues to contend with. Meet them head on for the best possible outcome.

The Suit of Pentacles and Reversed Cards

Pentacles (or disks or coins, in some decks) are the signifiers of wealth, comfort, money, and material goods. This is the suit of hard work that pays off, of secure futures and signposts that help you moderate your approach to the material side of a situation. If you’re asking about a business or home issue, Pentacles is usually the suit you want to see.

Pentacles reversed indicate, of course, that something’s off. Delays, missed clues, and also overdoing it, or dealing with a lack of restraint regarding something material, are hallmarks of these reversed cards. Don’t get scared if a reversed Pentacle card shows up in a spread; remember that these cards are signals, not outright fates.

One very positive perk of getting a reversed Pentacle card is that it can prod you to look more closely for opportunities. Something’s there that you’ll like and you just haven’t spotted it yet.

The Queen of the Material Realm

Queens are often, but not always, motherly figures; the Queen of Swords, for example, often indicates a lone woman who doesn’t necessarily have a partner and children (some decks position the King of Swords as her brother, rather than a husband). Queens have a stable energy that is often quietly and steadily expressed, and she is well aware of what she’s capable of. She’s a positive figure to have in a spread.

A Queen card that is reversed tends to reverse the energy. All that internal expression is now directed outward and very apparent, if not overwhelming.

The Queen of Pentacles takes that motherly, capable energy and runs with it. She’s particularly outdoorsy but also appreciates fine living; she’s the one who doesn’t need to glamp instead of camp, but she sure appreciates peaceful, neat surroundings and a trip to a spa after the camping is over. She’s also a fantastic businesswoman and her energy indicates a comfortable home life and stable financial resources for her and her family.

So the sight of the reverse of the Queen of Pentacles might seem really depressing at first, and as a court card, she can represent someone who isn’t expressing Pentacle energy in the most productive way. But it is always possible to modify the situation.

As with other court cards, the Queen of Pentacles and its reverse can indicate a person, yourself, or the circumstances surrounding an aspect of your question. For example, if you’re moving and want to know how you and your housemates will get along, and you get the Queen of Pentacles reversed in a spread position related to yourself, it could be that you’ll end up having to be the adult in the room, or that your behavior could seem overly motherly to the other housemates. It could be as simple as you baking way too much and pushing your kitchen experiments on others, but it could also indicate others’ irresponsibility that you have to clean up or manage.

Or, if you’ve already been in those situations where you’re basically taking care of everyone else, it could indicate a fear that you’ll fall into the same trap. Check your thoughts and see if you’re concentrating too much on your previous experiences as you try to move forward. Reversed cards can indicate being held back, and being held back by a previous experience fits that bill.

If the card appears in a position related to others in the house, or to a short- or long-term outcome, you could have to deal with a woman who smothers you in some fashion. Maybe you have a landlady who keeps messing with your laundry because she thinks her way is the only correct way to do it, or maybe a housemate will criticize your food choices. Or a female neighbor (or even a family member, if you’re living on your own for the first time) will become convinced that you can’t take care of yourself.

Looking at the card from an environmental point of view, rather than a personal point of view, it could be a signal to keep to a tight budget until you’re more confident of what your monthly expenses will be like, or a signal that creating a comfortable home will take more resources than you realized. Something is off, materially, so be cautious with those material matters and move slowly and conservatively.

Going back to the bit about spotting opportunities: It is entirely possible that the Queen of Pentacles reversed is telling you that something is materially off with your situation but that it is leading to something better. For example, you could land in a questionable housing situation at first but then find a much more compatible group of housemates down the block — but you might never have looked at that second group had you not found the first group.

Most decks place court cards in profile, so the person on the card appears to be facing one way or another. Always look at where the Queen of Pentacles is facing. If she’s looking at another card, pay particular attention to that card. It will give you more clues as to how to interpret the reversed court card and possibly how to remedy the situation. For example, if she faces a card from the emotional suit of Cups, it could indicate that more understanding is required between people, or that the issue at hand will have more of an emotional, personal bent rather than one that’s work-based.

Interpreting card imagery is personal and obviously depends on the deck you use. Many follow the classic Rider-Waite image of a seated queen holding a coin or pentacle, but others use more creative visuals and it doesn’t hurt to take these new images into account. A deck with more modern imagery, for example, that has the Queen of Pentacles working in an office, could make the interpretation lean a bit more heavily on the businesswoman side of the Queen. Budgeting, household expenses, and work issues, such as work-life balance, might be more prevalent than over-mothering. If the card shows the Queen in a lush garden, there may actually be health and exercise interpretations that you can consider.

Your question and spread as a whole will give you the complete story. While there are one-card spreads, multi-card spreads give you a wider picture and an online tarot reading helps you navigate whatever issue is at hand. And if the Queen of Pentacles reversed shows up, welcome her – you’re getting an important message and, once you act on it with confidence, you’ll find your life improving.