Working With Your Court Cards: The Four Knights of Tarot

Home /Tarot/Working With Your Court Cards: The Four Knights of Tarot
Tarot | 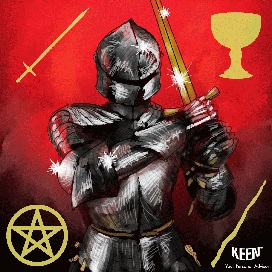 Have you found working with your Tarot cards to be confusing when the Court cards arise? You aren’t alone! Most readers find the Court cards challenging at first. In this article, we’ll explore traditional meanings and how to find your way with the exuberant, Knights of the Tarot.

The origin of the Court cards is different from how we work with them today. In the original European gambling card decks, there were Superior and Inferior Officers. Written descriptions of Kings appeared on the Islamic decks, along with Ministers and Deputies. The Queen did not appear until European decks evolved the Court cards in the 15th century. The French renamed the Superior and Inferior officers Queen and Knave respectively, and other countries followed suit.

Court cards evolved as the Tarot itself did, being named for the Nine Worthies — an assorted collection of heroic figures — who theoretically represented the four great empires of the world as seen in medieval times. Greeks, Romans, Christians, and Jews were represented. Eventually, the worthies represented the Kings, while Queens took on the names of Biblical and mythological women. Knaves were knights or champions well known to people of the time.

Modern decks typically have a King, Queen, Knight, and Page/Princess. Some traditions replace Kings with Knights and have a Page and Princess. But for our purposes, let’s look at the four Knights as the adolescent, youthful expression of each suit.

Discs, coins, or pentacles represent the Earth element and the practical realm of our lives. They also represent wisdom, skilled work, money, study, and steady growth. The Knight here represents, as a person in the querent’s life, a useful, steady influence. Medieval cartomancers believed that the Knights represented the thoughts of the King or Queen, rather than a person you would be actually dealing with.

When this Knight shows up in a reading, we know that there is some reliable, steady energy needed or present (depending on where it is in your spread). It can denote a young person with that energy being available, but more often I find that it shows the presence of the steady growth of a project, a useful, dynamic energy showing up in the situation — or a need for that. Here is the Knight devoted to his quest, no matter how slowly it unfolds. He will stay the course.

Cups represent the water, or emotional element, and the interior life of our heart. They also represent our creative expression. This charismatic Knight is a romancer, a true courtly lover in the sense we understand from Arthurian tales. He is seeking the perfect quest — and often remains so involved in his idea of the quest that he doesn’t even dip his toes in the real emotional river running right beneath him.

Traditional cartomancers saw this Knight as a messenger or the harbinger of an arrival or invitation.

I find when this Knight rides into the picture, he represents enthusiasm to be sure, but also a tendency to not see the reality of a situation. At times, he represents a willing lover in relationship spreads, but also one that may end up being emotionally immature.

Often, he shows that the querent is overlooking the abundance he or she already has while continually searching for the next cup of plenty. It can be a message to not lose yourself in the eternal quest for something that may not exist.

As a representative of the element of air, Swords also symbolize the intellect and the mind. The Knight of this realm is a natural combatant and is present to root out ideas and beliefs that don’t serve the situation — or he shows scattered thinking that may be energetic but too chaotic to be helpful. He can be extravagant, distrustful, or show that, in the querent’s situation, there is a lack of trust.

In my deck (the Golden Tarot), this Knight is portrayed in battle with a dragon. I see him as tirelessly being the force within that slays destructive thoughts and mental patterns. He supports the quest of slaying our own thought-dragons.

Traditional cartomancers saw him as a man of war, skill, and bravery who would enter the querent’s life.

The adventuring Knight of Wands brings the energy of fire and, in the realm of our creative, spiritual endeavor, our will to take action. He is masculine, assertive, and on the go. He can be violent, and like all the Knights, prone to act first and think later. His exuberance especially needs to be channeled — and shows where the querent might be acting impulsively and need to slow down.

Like all the Wands Court, I find that he has a certain compelling sexual energy and can represent the dangerous or risky attraction in relationship spread — though this may be just what we want! His impulsivity has the most direct effect of all the Knights, and while this is invigorating energy, it needs to be consciously worked with.

Traditional card readers all agree that this card signifies a departure, a move, a leaving of home.

You have to find your own way to work with these energies. When I see the Court cards coming up in readings, I feel that they more often represent a strong distillation of their suit and rank, as opposed to an actual person. But you might find differently!

We all have masculine and feminine inside of us to develop, and often, these cards will call forth what is needed. At times I or my clients have chosen a significator from the Court that is not our same gender to more deeply identify with the specific energy.

The Knights show action and activity, the active seeking of the principle they represent. They are not fully grown — but they aren’t children either. They can be trusted, but only so far, for they have not yet gained the wisdom of experience and age.

The next time a Knight shows up in your reading, or if you are consistently pulling one Knight, why not try a session with an advisor on Keen to further illuminate the Knight’s message for you?

Keen Editorial Staff
Keen's Editorial Staff is made up of world-class writers, astrologers, psychics, and advisors with diverse experience and spiritual sensitivity.
Relationships and Astrology: The Ascendant / Descendant Axis
PandoraP: Learn to Transform Your Life By Shaping Your Destiny