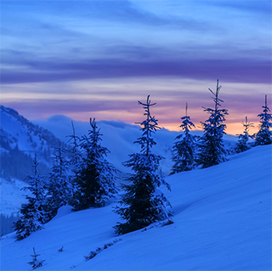 The Winter Solstice occurs on December 21 or so, when the Sun enters the Cardinal sign of Capricorn. The Sun rises and sets at the greatest southern distance from the equator. This day marks the official beginning of the winter season with the longest night of the year and the shortest day. In the Southern Hemisphere, the opposite is true: This time marks the longest day of the year and shortest night.

The Winter Solstice correlates with many traditional world holidays, usually associated with ‘festival of light’ celebrations, which honor the dark of the year and express faith in the return of light and the upcoming growing season. Christmas, Hanukkah, Diwali, St. Lucia’s Day and Loi Krathong are just a few examples of some holidays near the Winter Solstice.

Winter is the time when creatures in cold climates prepare to hibernate and settle in for the season. The long nights lend to rest, introspection, meditation, home cooking, recovery, sleep and study. This may be why holidays near this solstice tend toward family activities and rituals. In song, winter refers to the mature years of adulthood, the time of retirement.

Winter Solstice also signals the passage of a cycle. You may want to take this period to evaluate the major events of the previous 12 months. Did you accomplish what you hope to achieve during that time? Would you have done anything differently? As you ponder in retrospect on what has just passed, you can begin to look forward to what you might achieve in the upcoming year.

Keen Editorial Staff
Keen's Editorial Staff is made up of world-class writers, astrologers, psychics, and advisors with diverse experience and spiritual sensitivity.
Sexual Compatibility By Horoscope
Infographic: The Science of Summer Love