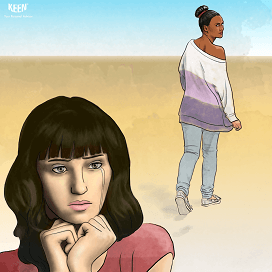 “Is he coming back?”

“I can’t live without him! I have to know what’s going to happen!”

These questions—and endless variations on them—are common when clients call for love advice. It’s natural to want to know if a reunification is possible, especially in the first stages of an unwelcome breakup. I’m always happy to help clients navigate relationship issues since, of course, I’ve had my own, and I know how it feels to just want answers.

But although some psychics may claim to be able to tell you definitively that an ex is coming back or not, I don’t believe that’s really possible. Trying to see the moment by moment free-will choices of anyone is challenging for even the most gifted psychic. Still, psychics can be immensely helpful in all stages of relating—especially that tender breakup time. We can look at soul agreements, karma, blocks to success, growth opportunities, and more. An intuitive may be able to help you understand what went wrong, and help you find ways to not repeat the same mistakes. And—my favorite—we can help people heal and move on.

Sometimes clients can’t even begin to look at the bigger picture of their relationship patterns without first addressing this question of the ex’s return.

Rhonda had been with Jake for about five years. They had been talking about marriage, kids—all the commitment stuff. But then Jake bailed on the relationship without any warning. Rhonda came home one day and his stuff was gone. There was a brief note saying he needed to move on. He wouldn’t return calls for a month, and then, slowly, he began to make contact. At this point, she called for a reading, crazy to know what was going to happen.

When I looked into their karmic agreement, I saw they had more than one past life story of betrayal and disappearance. They had arrived at a never-ending loop of action and reaction in each lifetime, playing out a soulmate contract that was no longer useful. In light of this information, I asked her if she wanted to keep the contract or dissolve it. If she chose to end it, she would at least be free to make new choices for herself. If not, then she and Jake would likely keep repeating the pattern—even if he did come back.

“If you dissolve it, you might find that he senses that, energetically. He might try to pull you back in. How do you feel about ending all contact for at least several months?” I asked her.

We also talked more about the dynamic of their relationship and what else might have led to Jake’s leaving. Rhonda got more honest with herself, recognizing that a lot of their discussions about marriage and kids were initiated by her and that he had always been a bit evasive. She took some time to think about it, and then returned to have me help her clear the contract.

In this example, my guidance showed that he might come back, but because of their pattern, would probably leave again and cause even more pain. Rhonda had free will to decide what she wanted to do. She was sad but was also able to see her choices clearly and begin to move on.

“I Can’t Live Without Them!”

I do hear this quite often, and it’s a common feeling after a breakup. But I have to take a firm approach with these clients—because of course they can live without this other person! When anyone feels that another person is crucial to their own life, happiness, reason for living, etc., then there is a co-dependent dynamic at work. The relationship is likely unhealthy at the core, no matter how it looks on the outside.

Jona came to me with just this feeling. Her partner of many years, Anna, had left her for another woman. She told me she’d do anything to get Anna back because she couldn’t imagine life without her. She was unwilling to look at any other part of the situation until I read to see if Anna was coming back. I warned her that accuracy was not likely in this type of scenario, but she insisted, so I did a Tarot spread for the relationship.

The bulk of the reading indicated that the relationship had indeed been codependent and that there was an imbalance of power. The outcome card was the Nine of Swords, and Jona freaked out when she saw it. But I pointed out that, in this case, she was already living the Nine of Swords—a state of despair and self-torture based on her own thoughts. It looked to me like even if Anna returned, Jona would be unable to trust again and would end up in pain anyway.

We pulled an additional two cards: one for the outcome if she didn’t try to get Anna back and one for if she kept trying. The first was the Eight of Cups. By letting go of a stagnant emotional situation, she would be able to move forward toward the greater happiness promised by the Nine and Ten of that suit. The second card was the Hanged Man. In this case, there would be waiting, chaos, and her world would continue to feel upside down and frustrating. The Hanged Man indicated there was no timing she could depend upon, and that her life would be “suspended” from normal activity as long as she went in this direction. She left unsure of what she would do.

As I cautioned her, I couldn’t tell Jona exactly what would happen. She did end up spending some months trying to get her partner to reconcile. When she came back, she told me that life was terrible in this wait-and-see mode. Finally, she was ready to let go and move on.

“Being alone can’t be as bad as what I’ve been dealing with,” she said.

When I spoke to Jona again, a year later, she was slowly entering a new relationship but with a completely different orientation to her emotional interdependence and power.

A psychic advisor can help you navigate the end of a relationship and can look at what may happen. But it’s best if you are realistic about your expectations. Free will is powerful, and we’re all making choices every moment. Relationship endings are complicated, as is the healing process. A psychic advisor can help you understand much of what may be going on behind the scenes (such as contracts or past life restrictions) so that you can move forward—either on your own or in a more healthy way if your ex returns.

Are you in a relationship crisis? Do you need help understanding a breakup or how to move on? Advisors on Keen can offer you compassionate guidance. Call today!