How to Make a Fail-Proof New Year’s Resolution 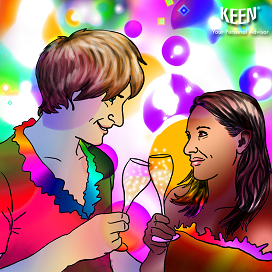 This New Year’s, are you committed to getting fit? How about finding love, becoming an ace piano player, dunking more basketballs, saving more money, or quitting smoking? Resolutions are theoretically a great way to challenge yourself and take control of your life—but in practice, most people are over their vows by February. The cultural phenomenon of failed resolutions has even come under the scrutiny of clinical psychologists, who suggest that the newly minted gym rats of January 1st get discouraged by unrealistic goals and disappointed when overblown expectations don’t pan out. In the wake of so many abandoned resolutions, what can you do to make this year’s ironclad?

In our culture, it’s typically more desirable to reinvent yourself than to accept yourself—have you ever noticed that there are no reality shows about overweight people deciding they’re comfortable with their size? The interminable drive for self-improvement is almost as American as the Twinkie. But perhaps a byproduct of championing the self-made man and woman is the elevation of the New Year’s resolution to mythic proportions. In the promised land just beyond December 31st, a new, happier and more fulfilling life awaits us, if we’re willing to put in the effort. Right?

Well, sort of. Choosing fewer frappuccinos is certainly an improvement on your dietary and financial fronts, but you’re still going to be bad at public speaking and regretful of that mean thing you said to your mom and afraid of being single indefinitely. It isn’t to say that resolutions have no value. Just that you’re still going to be you, only with fewer frappuccinos. So If you’re banking on this year being the one in which you finally “embrace life” and discover true love—contingent on hitting the gym twice weekly—you’re setting yourself up for some major disappointment. Those kinds of character changes come from serious introspection and hard inner work, not a few lifestyle tweaks determined at 11:55 on December 31st.

It’s okay to want to change something about yourself. It’s great to break old, draining habits. When we secretly burden our resolutions with high hopes for a totally transformed life, though, we’re easily disillusioned when the dream doesn’t pan out. If you want to learn to play guitar for its own sake, that’s a resolution that’ll hold up to resistance. If you only want to learn to attract members of the opposite gender, your commitment might fade if the end goal (a relationship and a tour bus) doesn’t materialize rather soon. So this year, maximize the staying power of your resolutions by choosing targets that are rewarding for their own sake and keeping your expectations clear.

So, what is it that you want to add to your life? Do you want to be spritely enough to go bouldering with your friends? Do you think you’d feel more energized if you cut back on sugar? Has your doctor been breathing down your neck about smoking? When you’ve found a cause to commit to, don’t embark on the journey without a roadmap! Expert goal-setters (yes, this is a real job) suggest a few parameters for outlining an attainable target.

1. Is your resolution specific? If you want to be nicer or a better girlfriend in the new year, that’s admirable, but paralyzingly vague. Put some numbers on your goal: you’ll volunteer once a month, lose ten pounds, watch no more than one hour of television a day, and so on.

2. Good resolutions are measurable. When you can see your progress accumulating, you’re less likely to give up. So if you want to become a writer, try committing to a daily word count. If you want to eat better, get out your measuring cups and count how many veggies are in your diet. If you want to be more focused, choose to meditate for fifteen minutes a day.

3. Even the most noble goal will fail if it isn’t attainable. Does your resolution fit in a one-year time frame? If you’re a seven-year-old dreaming of becoming president, or a desk job holder with eyes on the International Space Station, you might need to budget some more time and resources to your plan. Those are more like longterm goals than a New Year’s resolution.

4. Ask yourself honestly: is your resolution realistic? Even if it’s physically feasible, is it something you really see yourself loving? If you can’t stand peppy personal trainers, or don’t have time in your work schedule to make the drive, maybe going to the gym each weeknight isn’t realistic for you. Explore what alternatives, (home workouts? ballet class?) can realistically fit your lifestyle and personality.

5. Lastly, your resolution should be tangible. Being happier, prettier, or more famous doesn’t make the cut, but starting therapy, experimenting with new outfits, and going to more social events would all work. If your resolution doesn’t represent a concrete lifestyle choice you can make, it’s going to be hard to enact.

Although most New Year’s resolutions won’t give you a totally new life by February, when they’re well-planned, they can be fun, enlightening, and fulfilling. So rather than banking on a total reinvention, try to see your resolution as a small but totally worthwhile step in your life’s path. Most of the big dreams, like being an astronaut or having a better relationship, are the end result of thousands of tiny achievements—every writer had to fill their first page, and every old married couple had a first date.This year, whatever you commit to, whether it’s a trivial or herculean labor, trust that even your smallest efforts count.

The New Year is a time of reflection and growth. Advisors at KEEN.com can you help you see and reach your highest potential with spiritual guidance, personalized readings, and more.

Keen Editorial Staff
Keen's Editorial Staff is made up of world-class writers, astrologers, psychics, and advisors with diverse experience and spiritual sensitivity.
Your Love Forecast for 2016
Have We Met Before? Lovers from Past Lives