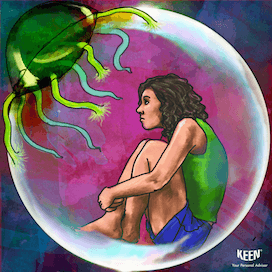 Leslie called me for a reading. She was upset and scared. “I think there is an entity or something attached to me,” she said. “I feel like I’ve got really negative energy around me, and it won’t go away!”

Matt booked a session the same week. “Ever since my dad died, I can’t shake the feeling that he’s attached to me somehow. How can I release him? Is he a ghost or what?”

Another client, Ruth, called in reporting nightmares and a feeling like some kind of energy was stalking her. “I’m terrified,” she said. “I don’t know what to do.”

And it wasn’t even close to Halloween!

Entities and Other Attachments

It is actually quite common to have energies that are not your own attached to you. And although some attachments can be quite disruptive, no discarnate being can actually harm you. Also, spiritual law states that no entity can stay attached to you against your will. Once you feel that there is another energy along for the ride, you simply have to ask it to go! So relax, and let’s take a look at the different kinds of beings that you might find in your energy field.

Past Life Entities: This is another soul, not presently incarnate, that is attached to you. There must be a link between you and that soul. Unfinished karma—generally traumatic—is the typical attaching mechanism. You may feel the primary emotion of the unfinished karma, even when it doesn’t make sense. For example, in Leslie’s case, when we did the reading I found a past life entity attached. The connection was indeed negative; she and the other soul had entered into an agreement in a past life that had caused a lot of trauma. Because the soul was attached to her, the feeling of the trauma was always present. We released that soul to love and light, and Leslie felt immediate relief.

Negative Thought Forms: These attachments are the most common. They are essentially amalgamated clusters of thoughts with similar vibrations. Thought forms can carry the signature of fear, hatred, anger, despair, paranoia, and so on. When a person or group—a family, company, country—thinks enough about a certain idea, emotion, or event, these thoughts come together and then attach to those with similar energies. The result of having a negative thought form attached is that you will find yourself creating more of the signature emotion—even if you are trying not to.

Present Life Entities: These entities are created when negative thought forms get enough strength or momentum to actually attach to someone. They are not souls, but they can create disharmony. These entities will find a human who is an energetic match and hover around them. When the match is strong enough, the entity can attach. In Ruth’s situation, she had a lot of fear in her field as a result of some childhood trauma. When I looked at her aura, I could see that there was an entity definitely hanging around, like it was stalking her. Her nightmares generated even more fear, which made her an attractive prospect for the present life entity to attach to and thus be able to grow. I suggested a simple ritual to her so that she could release the entity, and we continue to work to heal her fear and sleep troubles.

Ghosts & Poltergeists: Although not nearly as scary as movies portray them, these entities can impact you if they are attached to you or your home. Ghosts start out as confused spirits who don’t fully transition for some reason and then over time learn to attach to incarnated humans to get energy. Typically they are location specific and don’t follow people around. Poltergeists are ghosts that have gotten good at actually moving energy, and so they can create mischief in your home (making messes, hiding things, turning lights on and off). They too are typically attached to places, although they can attach to people too—and then that person gets blamed for “being” the poltergeist. When I looked at Matt’s field, I could see that his father was indeed still around. Matt confirmed that he and his dad did have unfinished business, and so together we helped close those issues and assist his father to move on.

Demons: It is very, very rare for someone to have an actual demon attached to them, unless they have specifically called in a being through the practice of black magic or satanic worship. But even these beings must go when they are requested to leave.

Remember, you must on some level match the vibration of the attaching entity before it will even be attracted to you and then you “agree” (consciously or unconsciously) to let it in.

How to Release A Being

It is easy to release a being—just ask it to go in accordance to spiritual law. However—knowing it is there and what it is can be a bit trickier. This is where it is helpful to work with a psychic or healer.

I use a combination of simple rituals, prayers, or meditations with my clients once I have recognized what is there. When doing healing work, I will remove it with light energy. Certain essential oils are purifying and useful after a clearing. Frankincense or Palo Santo are the best: dilute in a carrier oil like coconut or jojoba and apply topically over the affected chakra or heart area. (Note: essential oils are powerful and may cause allergic reactions. Do not use directly on skin or in eyes or mouth.) Stones such as amethyst or clear, rose, or smoky quartz help release negativity and repair the aura.

Though feeling an entity or finding that you have a being in your aura is unnerving, remember that you are in control of the attachment! Nothing can attack or drain your energy unless you allow it to. Once you are conscious of the attachment, you can simply choose to let it go.

If you have negative feelings that you can’t shake or sense the presence of another around you, it may be that there is an entity attached. An advisor on Keen can help you understand if beings are in your energy field and help you remove it.