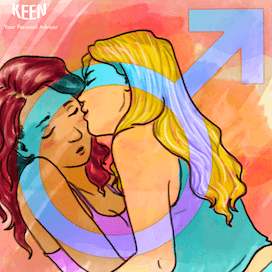 War, sex, aggression, anger; these are the keywords we associate with Mars, the god of war. It is true that Mars governs how we express ourselves sexually and physically, and often it also shows how we demonstrate our anger or deal with conflict and aggression. All these factors are crucial when it comes to love compatibility in the astrological chart.

Mars expresses itself differently through men and women, but it is equally important for both. By taking the time to know and understand your own Mars placement, you can gain greater self-knowledge. Often we don’t even really understand how we react, or what we need sexually. Mars can help us cut through layers of societal and family conditioning to get to the truth of ourselves.

Mars in a Woman’s Chart

When it comes to attraction, Mars is key in a woman’s chart. The qualities of Mars by sign and house placement will show the type of person she finds attractive. Mars also represents how a woman likes to express her sexuality and have that expression validated. And perhaps most important but seldom discussed, the Mars sign in her chart shows the qualities she needs to cultivate within herself as her divine masculine.

Laurie was new to astrology and came to me looking for information on “the right sign for my sun.” This is common—people think about matching up their sun signs. But after a little conversation, I felt it was important to encourage Laurie to get to know her Mars.

Mars was Laurie’s least aspected planet, meaning that it was a bit dormant in her chart and needed to be consciously activated by her. In addition, she had Mars in the Twelfth House, in the sign of Cancer. Laurie was very detached from her sexual needs in relationships. She was deeply spiritual and had even at one time considered joining a religious order where celibacy would have been one of her vows. She tended to attract men who were either not very sexual themselves or who wanted her to mother them. She wanted a man to nurture her (Cancer), and instead ended up feeling like an angry mother figure in most of her relationships.

I explained to Laurie that she had to learn to nurture herself, to have compassion and softness towards her own sexual needs, and to do some healing work around her conflict between spirituality and sexuality. Developing her sacred masculine—or animus—would free her from projecting her inner needs onto a partner and would allow her to attract a man who also had a healthy relationship with his sexuality. Of course, she was going to want a man to share her spiritual life with and to merge with emotionally and spiritually, but unless she was healthy and complete inside of herself first, this was going to lead to codependency. She also needed her Cancer Mars to be validated. Her man will need to acknowledge her soft and nurturing nature in bed and connect emotionally with her throughout lovemaking.

Mars in a Man’s Chart

Mars is the expression of masculinity in a man’s chart. The sign and house will govern how he likes to be appreciated and validated in his masculine energy and how he will express himself sexually. The sign shows the masculine principle a man is working on in this life.

James has Mars in Taurus, in the Tenth House. He will express himself in a very solid and more typically masculine way. With the Taurus sign, he will be a practical sensualist who enjoys sex—and likely be good at it too! Mars in Taurus likes to build and establish things, and in the Tenth House this will likely be his career. A woman who appreciates his straightforward but sensual approach to sex and his practical achievements will win his heart. He may be a down-to-earth dad too, and this is something he needs recognition for. James tended to attract women who were independent and not interested in family life (his Venus is in Aries), but when I explained that he needed a woman to appreciate his Mars, he got very clear about what type of relationship he wanted.

Although Mercury really governs how we communicate, Mars also shows how we deal with anger and conflict. And relationships will have both—so it’s important to know your partner’s Mars placement.

Laurie’s Mars in Cancer is going to tend toward passive-aggressive expression or be suppressed as “bad” (Twelfth House). She needs a partner who will understand that she is afraid to express her anger and be willing to work with that. Anger in these watery placements will be emotional and need nurturing understanding. Cancer does not like to express directly and may take time to get to the point. Honoring her Mars in Cancer will mean letting her take her time to be vulnerable and being gentle when she shows her soft side.

James’ Mars in Taurus will express anger more matter-of-factly and to the point. Taurus can be stubborn, and with the Tenth House authority, he can be tough to argue with. His partners will need to acknowledge the Taurus ability to “dig in” and know when to let an argument go and revisit when things have cooled down. James may need to slowly process issues that make him angry so he can be able to discuss them later. There isn’t any hurrying a Mars in Taurus—so patience here is a must.

Together with Venus and Juno, Mars occupies an important trio of planets to consider when looking at compatibility in the astrological chart. When a woman can embody her own Mars energy, she is able to make the “inner marriage” and then attract men who also embody the positive qualities she seeks. Men who honor their Mars—especially the less traditionally “masculine” placements, like Pisces or Cancer—are able to find their true expression of manhood and find healthy sexual expression. When we know and validate the Mars of our partners, we are well on our way to passionate, healthy relating.

To really understand your chart in comparison with another, contact an astrological advisor on Keen. You will gain even more valuable insights and be able to navigate your relationships more confidently.