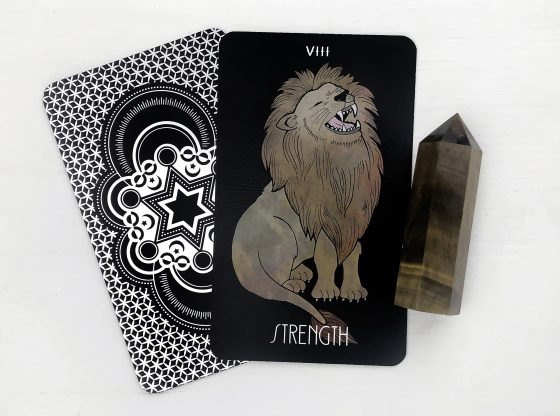 Do you feel a little more in control with less effort than ever? Is it easier than before to maintain your position and engender respect? Has a relationship that might have once been frustrating lately been a source of joy? Has your anger over a situation made you more committed to taking responsibility and working toward positive outcomes? The Strength card is one of the most sophisticated cards in the Tarot deck, representing a higher level of consciousness that takes responsibility in order to master yourself and your world.

Under a golden sky a woman pets a lion on its forehead and lower jaw. They stand on a verdant landscape and the king of the beasts is tamed under the gentle petting. The woman gazes down with a peaceful smile on her face. Her robe is adorned with a floral garnish and she is crowned with a flowery laurel on her head, above which floats a lemniscate (represented as ∞) – the sign of infinity.

The lemniscate is the same as that floating above the head of The Magician (Tarot card #1). This is the symbol of possibilities and self-mastery. The woman depicted here is in the act of soothing the savage beast. She is in control of both her predatory instincts and the chaos of living in the wild. Similar in calm appearance to the Tarot deck’s Temperance (card #14), her mastery of the animal indicates that she has conquered more than just herself and exerts a control over aspects in the world around her.

When a Tarot reader sits down with you and deals out the cards, the spot in which each card lands has a predetermined significance. This changes the meaning of the card. Various positions represent your past, your present and your future. Sometimes the difference in a card’s energy based on its Tarot spread location is subtle; often this difference is significant.

When Strength is in the past position of your reading, you can see the basis of your current situation stemming from a mastery of your circumstances. You maintained composure recently and are benefiting from your patience and expertise. Sometimes this card represents a state of boredom in your past that led you to stray from familiar conditions that you felt you had outgrown. Your ordinary world had been mastered and the journey you are now on is based on a desire to challenge yourself and see all that life may have to offer.

In the present position, Strength is one of the best cards in the Tarot deck. You are in the midst of getting to know how to rule your world. You are not domineering in this control. Strength is a card that exerts its control through understanding and cooperation. You are in charge, but others do your bidding because you have made it worth their while and created a joyful context in which all of you interact.

The blessing this card brings in the future position is the reassurance that whatever is pestering you in life now will soon come under your control. Strength in the future position represents a loving dominance of circumstances that may seem beyond your power at the moment. Longtime challenges will be met and mastered if you keep with the path indicated by the cards leading up to Strength. The best part of this card is learned in getting to know and appreciate yourself – the woman in the Strength card has the animal under control, but it is the look of peace upon the lion that gives this card its greatest possibilities. There is no leash or shackle on the king of the beasts – your peacefulness and self-acceptance will arrive because you will see yourself as the world views you.

Only a few cards in the whole deck are dealt out into your Tarot reading. This makes the reading unique – it is almost impossible to replicate. As cards interact with each other, your reading is subtly influenced; the meanings of each card change depending on the cards around it.

When Strength is in a reading with The Magician or Temperance, as discussed above, there is a greater likelihood that your mastery over events will lead to getting exactly what you want.

There are four cards of the Tarot’s Minor Arcana that carry the number eight and each of them are related to Strength. The Eight of Wands represents your ability to stay on message and create new realities within a consistent theme. The Eight of Swords is a card of keeping yourself aloof among all the tension that is about you. The Eight of Pentacles is a card of mastering your moneymaking potential through patient diligence. A commitment to consistency pays off with this card and underscores the control that can be grasped when we aim to control our immediate surroundings instead of trying to take on the whole world. The Eight of Cups signals abandoning what comforts you as you strike out to take on the world, another theme of the self-confidence that is inherent in the Strength card. Any of these appearing in the reading alongside Strength bolsters your control over these specific things in the world.

A great card to see in a reading with Strength is The Tower. This is a card associated with uncontrollable chaos. To have it appear here would mean that your ability to master things around you even extends to the luck of the draw. If you have been feeling like taking a little gamble, be it in love or Las Vegas, this intense Tarot combination is a green light on your road to taking bigger risks when the payouts are even bigger!

Keen Editorial Staff
Keen's Editorial Staff is made up of world-class writers, astrologers, psychics, and advisors with diverse experience and spiritual sensitivity.
The Three of Pentacles Tarot Card
The Seven of Wands Tarot Card