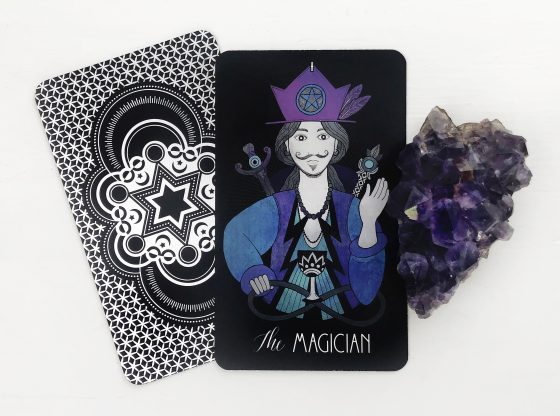 When the opportunity to use your best talents arises, your performance will seem like magic to those around you. When you have a set of plans and enact them to perfection, quickly accomplishing your goal, people will be shocked. Your accomplishments will seem ordinary to you, as if they should have happened without question, but others will look at what you do like it is a new form of magic. All of these circumstances summon forth The Magician card from the Tarot deck. This is the card of making things happen, being in control, getting what you want because you understand how to earn it … and impressing everyone in the process of doing what comes natural to you.

Under a golden sky and surrounded by lush, flowery vegetation, a robed man stands before us, behind a waist-high wooden table. On the table there is a sword, a cup, a pentacle laying flat as a plate and a wooden walking stick, also known as a wand. These are the four suits of the Tarot and they appear here as they do on the numbered cards of the Tarot’s Minor Arcana. The man raises his right hand. He is holding a small white magic wand. Above his head floats a lemniscate (represented as ∞), the symbol for infinity.

The Magician is pictured here at the moment he is casting his spell. The magic wand in his hand is elevated as high above his head as possible and over his head the lemniscate underscores that the possibilities in all of this laying before him are infinite. The table represents bringing in our own constructs and belief systems into the natural world. We change the universe we live in with our perceptions. That each of the Tarot’s suits is represented indicates that The Magician has the power and control over these things. Cups represent emotions, wands indicate creativity, pentacles are money and issues of the material plane, while swords represent the cerebral sphere of human activity and the verbal expressions inspired within that area. The Magician has domain over these areas of your life and is casting a spell to influence them. This is the card that indicates the ultimate level of control over your life and the events in it. This magician takes responsibility for who he is and what he can do; the objects representing the four Tarot suits are there on the table, he stands alone, nothing is hidden. The magic is in his supreme confidence over ruling the things in his domain that he knows he can control. The Magician is the Tarot’s card of being genuine and open, and transparent in any interpersonal dealings. This is the card of making it happen because you practice what you preach. The Magician is the complete package.

Your Tarot reading is an examination of the pattern of cards dealt from the deck. This pattern is called a Tarot spread. The pattern has positions for your past, your present and your future. Where a specific card lands changes the focus of that card to carry meaning related to that time of your life.

In the past position, The Magician underscores a surge of displaying your talents and getting far in the world based on accomplishments. Perhaps you are resting comfortably on a foundation established during that time. Or you may miss the days when you could seemingly put it all together with a snap of your fingers.

In the present position, this card signals the urgency of a situation of which you must seize to take advantage. In this position, The Magician indicates that your ability to be yourself and impress the right person or people can have a big impact on the direction your life takes. The Magician in the present position is a metaphor for your free will and good luck combining in a rare opportunity to move way ahead in life. When this card is in this position, take your great leap forward.

In the future position, The Magician is a card of amazing potency. This is an indication of your wishes being granted because you take the time to earn everything you want. The Magician represents manifesting your desires and visions. In the future, what you want will arrive when you follow the necessary course of action. You will no longer have to dream about being it; you will have become exactly who and what you wanted to be.

The Tarot spread is not a series of isolated cards; the presence of any card influences the others. All of the cards sing together in your reading, and it is a unique tune, harmonizing just for you.

When The Magician card is accompanied in a reading by The Sun, your drive to accomplish a big goal is given a great amount of energy, but selfish tendencies and self-absorption may emerge. When The Moon card is in the same reading as The Magician, your emotional desire to get what you want blinds you to everything that you already have. You could lose it all to gain one specific goal, be it a lover or a career promotion, no matter; it will come at a great cost.

The Fool is a card that complements The Magician wonderfully. Your talents come in handy when you are least concerned with getting ahead. The lack of desire creates a trust in friends and strangers alike and soon many people are helping you accomplish goals you never imagined pursuing. Temperance is a great card to have with The Magician, as you will selflessly work to help others reach their goals. The only problem might be that such a zest to help others leaves you not helping yourself despite an abundance of talent and connections.

The Three of Wands is another favorable card to have in your Tarot reading along with The Magician. This is the card of possibilities occurring in your favor out in the universe. The Magician has a wand on the table before him and holds a small wand in his hand to cast his spell. The Three of Wands continues this sequence; therefore, this card combination is as good an indicator of coming success from your present project as the Tarot has to offer.