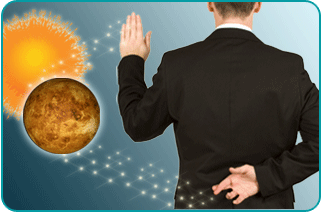 A lot of our relationships are based on trust. At times we check in and scrutinize this other person. We test our faith in them, or if they should screw up and be unfaithful or seem mischievous, we pull back the trust and hold their every action to a higher standard.

Of course, when asked, a person lying to you will almost always press ahead with the lie. Soon a lie has been added to the lie, the body language is shifting and a few facts are emerging in conflict. The famous words of Sir Walter Scott hauntingly arise:

O, what a tangled web we weave,
When first we practise to deceive!

What if you could wait until you knew a close friend or lover would reveal their true intentions? Is somebody close to you lying? While the Sun and Mercury are together, it is well within your rights to look a little more closely, ask a deeper question or two and bring up old business for a rehashing of information.

Astrology is the study of the effect the planets have on life here on earth. Each planet has specific energies and when two planets are occupying the same spot of the zodiac, the energies merge. From October 29 thru November 15, the Sun and Mercury will be in close enough union that their energies will combine. The Sun rules the human ego and our need to be validated by some source in the outside world. Mercury is the planet of communication. When these two heavenly bodies get together in the zodiac, everyone’s ego energy communicates its true intentions, no matter how hard people try to cover up what they are really thinking, feeling and doing.

The Sun and Mercury are getting together in Scorpio, the sign of building up intense loyalty and releasing deep transformative energy. The loyalty can be to a selfish pursuit of pleasure or to a cause that remains hidden from most eyes. The transformation can be the intimate connection one makes with a physical partnering or a casting out of a reality one cannot face or does not like.

Read below to see the clues of how you tell a fib  little things that will be more obvious while the Sun and Mercury are together. And even though you might lie about it, you can read his sign for clues as well…

While the Sun and Mercury are together you might get accused of having an affair or plotting to get part of an inheritance. Look to have a good alibi as to where you were at any given time.

When Fibbing: You change the subject

When Truthful: You go over the same point again and again

During this forecast period a partner will become unreasonably suspicious of you. A lot of trust could be out the window with a few unexplained absences. Punctuality alone could save you a lot of trouble.

When Fibbing: You start acting offended

When Truthful: You give the stare-down

There will be lots of funny business going on at work, school or in you search for a better job. You might be at the center of a scandal in which you play no part.

When Fibbing: You adopt a higher pitched voice

When Truthful: You tend to complain more

Prepare to be misunderstood in matters of the heart and proceed gently. Someone might assume you have a crush on him. It is best to avoid a reaction beyond a look of disbelief.

When Fibbing: You play it cool

When Truthful: You play it tough

Some evidence around the house could point to your guilt  or at least strengthen the case that someone is trying to make against innocent you.

When Fibbing: You minimize the importance of the topic being discussed

When Truthful: You break out the swagger

The tension in the room is from all the gossip going around. Did you make the wrong choice in gabbing? The Sun and Mercury meeting up could remind you to zip the lip.

When Fibbing: You deliver too much information and it creates confusion

When Truthful: You stick to the most important details

Someone could accuse you of taking some money while the Sun and Mercury meet up. You may want to clear your name by dramatically emptying your purse.

When Fibbing: You act ignorant of the details

When Truthful: You explain the big picture

The Sun and Mercury meet up in your sign and you could be accused of eating an extra slice of birthday cake, enjoying too much Halloween candy or over-sharing on the internet.

When Fibbing: You evade

When Truthful: You gloat

Look to avoid speaking your mind after a drink or two as you will be too honest about the people around you and word will travel fast back to them about any casual criticism you deliver.

When Fibbing: You waltz around the topic with avoidant language

When Truthful: You put it in writing

You could be involved in a case of mistaken identity and see that your face is incorrectly pulled from a crowd. At work, a group effort’s failure may be singling you out.

When Fibbing: You mock the status of those that question you

When Truthful: You assert that it can only be one way  yours!

If you were anything less than honest in getting ahead in your career, there could be some scrutiny. Someone competing with you is looking for a chance to get ahead.

When Fibbing: You tell them what they want to hear and explain that someone else holds such an opinion

When Truthful: You tell them what they want to hear and explain that you formulated this opinion

You may be isolated due to expressing an unpopular opinion. If the superficial differences between you and a group are that big of a deal, let the Sun and Mercury meet-up allow you to walk away on your own terms.

When Fibbing: You get quite forgetful

When Truthful: You can recite a clear timeline

Keen Editorial Staff
Keen's Editorial Staff is made up of world-class writers, astrologers, psychics, and advisors with diverse experience and spiritual sensitivity.
Summer Fun for Every Sign
Sun Moves Into Pisces