The Six of Wands Tarot Card 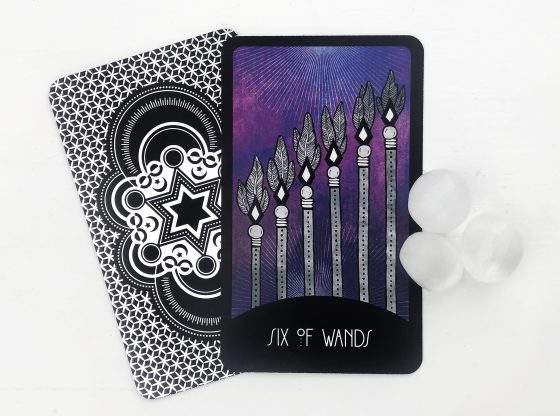 Have you been feeling like a winner? Is there something in which you take great pride that is getting noticed? If this is the case, don’t be surprised if you see the Six of Wands show up in your Tarot reading. This is the card of reaping the reward and enjoying the fruits of victory. This card stands for triumph, plain and simple.

A horseback rider of neutral gender parades through a crowd of people. Holding a wand in the right hand and the horse’s reins in the other, five other wands are held up by the onlookers under a cloudless blue sky. The horse rider’s wand has a wreath attached to it. The horse is white and is covered in a parade cloak of bright color. The rider is looking away from us, toward the crowd and is wearing the laurel crown of victory.

That the horse rider pictured in the Six of Wands is gender neutral indicates that the card is always concerning the person receiving the Tarot reading. It is your victory, so savor it. The blue sky is one more indicator of the positive nature of this card. The bright colors all underscore that not only is pride and accomplishment on display, but that there is a joy to be had in it – a celebration.

The location of the Six of Swords does not change its meaning, but it does let you know when this peak of pride in your life was, is or will be. If the Six of Wands is in the past part of your Tarot reading, the foundation of your current situation is in the victories or moments of pride from some time ago. Perhaps you are seeking a Tarot reading because life is not so glamorous or meaningful as it once seemed. Men in the midst of balding, graying or full-blown mid-life crises, often see this card in the past position. It harkens back to the days of their quarterbacking victories. Women who put a lot of emphasis on physical beauty and suddenly see their standards being eclipsed by younger women are likely to see the Six of Wands indicate that their current dilemma is based on the pride of the past.

A Six of Wands landing in the present position of your Tarot reading indicates that complete victory is at hand. If you are seeking the Tarot reading to see if a court case or other struggle is about to be over, this is an affirmative answer delivered on horseback. If you are looking for answers as to why you are struggling with a relationship or other personal setbacks, be they career, emotional or financial, the Six of Wands demands that you consider how your pride and vanity may be getting in the way of simple solutions.

This is perhaps the best position for this card as it is a hopeful placement and a card of glorious accomplishment. This is an indicator that a victory is coming. If you are working on an artwork or business plan, work project or slow soulmate seduction, the placement of this card insists that you should not now give up. One woman who had this placement in a reading soon found that the man on whom she had a crush had long been lusting after her, as she was “his type.” She immediately went from feeling self-conscious and unsure of herself to knowing that he had put her on a pedestal precisely because of who she was. You can be sure she was riding on a stallion of pride soon after.

The Six of Wands lends itself to the presence of other suits very well. When Swords are in the mix with this card, the reading indicates that you will say something to make an unassailable point on behalf of a friend or colleague. A reading that has a lot of other Wands adds to the feeling of accomplishment that comes with finishing a great project. When the Six of Wands makes an appearance amidst a group of Cups, emotional triumph will soothe old wounds, and perhaps permanently heal them. When the Six of Wands is surrounded by the suit of Pentacles, it is a good time to invest, play the lottery, hit the tables in Vegas or sell an old trinket for which you care little at the top of its market. It is said that banker J.P. Morgan sold an investment in a majority stake in a railroad company after the Six of Wands appeared in a reading with some Pentacle cards. After the transaction was completed, a recession hit and he bought the entire company back for 10% of what he had sold his shares for within a year.

When this card is paired with The Empress or The Emperor cards, a teacher, boss, parent or an older lover will heap praise on you. In the past position, such a pairing indicates a spoiled childhood.

The Six of Wands is the lower echo of The Chariot and The Tower. Both of these cards signal change, The Chariot being a card of dominating victory and The Tower being a card illustrating the intrusion of unexpected chaos. When the Six of Wands appears with one of these cards, a life-changing accomplishment occurs. This is the difference between being interviewed about an event for the evening news and others being interviewed about you for the evening news.

A number of Minor Arcana cards near the Six of Wands in a reading can indicate that the victory you are about to enjoy will not be what you think it is. Cards with a lot of gray in them, or ones with cloudy skies and sad, lonely people in them can pull the joy out of the Six of Wands. This does not mean that you didn’t earn a victory; it means that some forces in the universe will not let you enjoy it to its fullest extent.

If The Sun or The World cards are with the Six of Wands in a reading, your accomplishments will set the standard for years to come. Congratulations!

Interested in your receiving own Tarot reading? Book with one of our expert advisors today at Keen!

Keen Editorial Staff
Keen's Editorial Staff is made up of world-class writers, astrologers, psychics, and advisors with diverse experience and spiritual sensitivity.
The Tower Tarot Card
The Ace of Swords Tarot Card