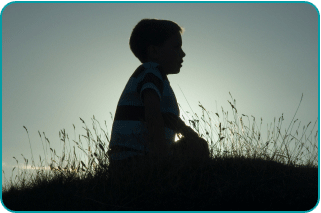 Children say and do enlightening things. They seem to hold the secret to life not only because they smile most of the time and play even when doing chores, but because they approach life with a sense of wonder, magical thinking and an understanding most adults have lost. Most children are their parent’s teachers more than the other way around. They coax the adults in their lives to embrace their own innocence, love unconditionally and approach life with a sense of excitement and enthusiasm. Some children are old souls and little angels on earth calling attention to the spiritual dimensions that interface this world. They speak with the wisdom of a sage and tap into a divine intelligence making seem like geniuses.

My first guru was just shy of six years old – my own daughter. At the time, I was going through a rough spot in my life and had little faith that things would improve. Like most kids, my daughter loved to draw and on one occasion handed me the most amazing crayon colored drawing. It was a picture of God with an enlightening description and message. At the center of the paper was a round yellow circle divided in the middle by a line to make two halves. One side she labeled “boy” and other side labeled “girl”. At the top of the circle it just said plainly “God”. Above the circle and on the corners of the paper were the sun and the moon with outstretched arms reaching out across the paper to grasp each other’s hands. Both the sun and the moon had smiley faces. The sun wore glasses, as a matter of fact. When she handed me the drawing, she uttered the most amazing thing. She said, “Mommy, God told me to tell you that you have to turn your power over to God.” My jaw dropped. Mind you, I don’t ever remember mentioning to her that a god even existed. The funny thing is that a few months later I met a man who was my perfect complement. He wore the same round wire glasses my daughter had drawn on the face of the sun. Sun and moon were together as prophesized by a 6-year-old angel on earth. And out of this experience, I was given a clear picture of what God was: A unified intelligence that was both male and female.

Children can point us towards our spiritual path. A friend of mine told me a fantastic story about her daughter when she was barely three. The family had gone to a Native American Pow Wow with traditional drumming and dance competitions. They were standing around the circle as one of many spectators watching the dancers perform when her three year old broke free from her hand and ran into the center of the circle joining in the dance. She was “fancy dancing” to the native drum as if she had danced the dance a hundred times before. Her mother recognized that her daughter’s soul memory was kicking in and that she was a Native American at heart. Later that year, my friend found a photo of her great grandmother in a deer skin dress amongst a group of other Native Americans. Her father who was ashamed of these roots had never mentioned the Native American genealogical tree. Through the dance of her daughter and the later discovery, my friend was pointed to a path rich in spiritual tradition.

Some children possess a highly developed spiritual eye with extraordinary psychic abilities. One of my students has a 7-year-old stepson who she relies on for psychic tips regularly. His clairvoyant powers are quite remarkable and his predictions spot-on. He is fascinated with crystals putting them up to his third eye, explaining how the crystals help him see. When my student told me about her stepson, I wasn’t surprised. My own godson had the same kind of fascination with crystals. On one occasion, when I was showing him all the specimens I had collected, he asked if I knew that you can carry a piece of the spirit of someone inside a crystal and bring it back into their body. Realizing what he had described was a soul retrieval technique used by shamans, I asked him where he learned this information. His response was that before he was born and while still in heaven he read the “Book of God” and learned a lot things like that. He said that the book held all knowledge.

Children can show us that we lived other lives. Another one of my students brought her six-year-old son, Daniel, over to my home for a visit. His mother and I were talking when little Daniel interrupted asking his mother why she had killed him in the fire. We both wondered what on earth he was talking about and began questioning him. He said that when he was a baby his mother left him in a burning house and that he died there. His recollection of the event was a bit distorted, because my psychic impression was that both he and his mother had perished in a house fire in a previous incarnation. The memory of that life had traveled with him to this life.

As parents, we usually owe our children a great deal because in previous incarnations we may have failed them or hurt them in some way. For this incarnation, we promise to love, support and teach them. Their choice is to service our spiritual evolution in unique ways. As one of my friend’s child said to her. “Mom, I choose you to be my mother in this life.” This 9-year-old girl signed up for an unusual incarnation, because her mother is a paranormal investigator. The girl has been ghost hunting and attending Wiccan ceremonies since the age of three.

Compassion is something most adults need to learn and sometimes they need the help of children to show them how they can touch the lives of others and make a difference in the world. Some kids are born humanitarians and are here to inspire others to lend a helping hand when they can. A recently publicized case in point is a 14-year-old girl named Hannah. She and her father Kevin Salwen, a writer and entrepreneur in Atlanta, were driving home from Hannah’s sleepover and while waiting at a traffic light, they saw a black Mercedes coupe on one side of the street and a homeless man begging for food on the other side. Disturbed by the inequity, Hanna told her father that if that man in the Mercedes had a less nice car the homeless man could have a meal. She insisted she wanted to do something. She convinced her parents to sell their luxurious home, donate half of the proceeds to charity and with the other half they could purchase a more modest home for the family. Out of their experience, father and daughter have recently published The Power of Half, a book offering hope and optimism to those who want to make a difference in the world.

Avatars, philosophers and sages sometimes live in broken little bodies. Mattie Stepanek was only three years old when he began writing inspirational poetry relying on his mother’s hand to transcribe his words. Although his life span was only 13 years, he published seven little books – the Heartsong series and a book of essays. Mattie suffered from a rare form of muscular dystrophy, DMM, and spend the majority of his life confined to a wheel chair and a breathing device. Despite his handicap, his determined spirit pushed on to deliver important messages to the world. For instance, on the topic of heaven Mattie said, “There can be many different views of what Heaven is like, because Heaven is whatever makes each person eternally and fully happy.” Mattie’s philosophy of life was just as poignant. He said, “While we are living in the present, we must celebrate life every day, knowing that we are becoming history with every work, every action, every deed.”