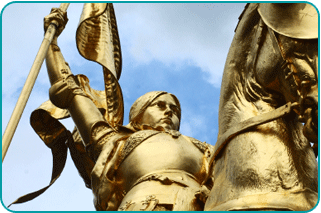 Until the last century, woman warriors had few examples. There were the Amazons in Greek mythology, Helen of Troy and yes, Joan of Arc. However, the fact that Joan was burned at the stake didn’t exactly make women of that period (and several afterwards) feel secure in stepping out to fight for the freedom of their homeland. Today, women run Fortune 500 companies, hold political office and are innovators in the sciences and technology, all once male-dominated professions. But too many of these women have sacrificed authentic feminine values to rise to the top, aligning with the patriarchy instead and perpetuating the status quo. A woman warrior can be taken down by the patriarchy just as easily today, especially in politics where women are often the target of sexism and branded irrational when they demonstrate emotional intelligence.

A woman warrior is someone who defends core feminine values. She may stand up in defense of children’s rights, lead humanitarian efforts, go on peace missions or stand as a protector of the environment. Whatever her role, she achieves greatness by standing her ground and pushing for change. Women warriors possess as much strength, determination and fortitude as any man. They are willing to take up arms and fight for a cause with relentless perseverance. And, for the most part, we admire them when they do. But many women, because of their receptive and sensitive nature, find it difficult to put on a warrior attitude and fight for what they believe in. Despite the fact that there is a woman warrior inside the heart of every woman, many women fail to find her.

The traits, attributes and characteristics of a woman warrior are best described by the following motivational quotes and pieces of wisdom:

You’ve got to get up every morning with determination if you want to go to bed with satisfaction.

Women warriors possess a determined spirit, a “can do” attitude that drives their actions towards their goals. When faced with limitations, disappointment or opposition, a warrior woman only gets more determined to make what she envisions happen. She won’t take “no” for an answer and will find a way barrel through obstacles until that “no” becomes a “yes”.

When we speak we are afraid our words will not be heard or welcomed. But when we are silent, we are still afraid. So it is better to speak

A woman warrior knows her words are powerful and that her opinions count. She chooses her words wisely, explains her position well and considers the feelings of others when she speaks her mind. “So what” that only half the time people listen or pretend not to understand. In her mind, they heard her but refuse to see it her way. A woman warrior is not afraid to explain her position again and again until her audience understands that she won’t go silent.

What is necessary to change a person is to change his awareness of himself.

To be considered a woman warrior it may require you change your view of yourself. Yes, you’re beautiful as you are. But really, “Who are you? ” You’re a woman who is representative of a gender that has been degraded, usurped, stripped of power and rendered invisible and silent for centuries. That’s truly who you are. With that identity firmly in place you now see your challenge: Get noticed, stand up for yourself, speak up every time you need to, and hold your head up proud.

Luck is a dividend of sweat. The more you sweat, the luckier you get.

Rising to action with strength, a woman warrior isn’t afraid to do the work necessary to fulfill her dreams. She sees no task too hard or no mountain of paperwork too high. She gets in there with both hands and does it herself when no one else seems motivated enough to pitch in. Sure, some luck and divine providence would be appreciated, but a woman warrior won’t sit back and wait for it.

The truth will set you free. But first, it will piss you off.

Never be afraid to feel the steam rise in your heart, because a woman warrior sees her anger as just the spark she needs to fight for change. She hates lies, deception and corruption and does more than vent and complain about it to friends. Her anger is a friend she has learned to trust to nudge her out of complacency so that she can fight to make a difference in her world. She will dig up the truth about a situation and when she does, she is not afraid to expose it.

The most common way people give up their power is by thinking they don’t have any.

A warrior woman is powerful inside and out. She almost never doubts that fact. She knows that when the force of her will is aligned with her spiritual creative power she can say to the mountain, “move” and it will move. She is comforted knowing she is supported in her mission by guides from above and can synergize her creative power with others to multiply her strength. She is confident that she can draw on her power anytime she needs to because it is intrinsic to her nature.

Courage is very important. Like a muscle, it is strengthened by use.

Bravery is second nature to a woman warrior. In the face of danger, she only gets more courageous and confronts whatever or whoever threatens her wellbeing or the wellbeing of others. When fear rears its ugly head, she ignores it and chooses a “fight” over “flight”. She understands that her viewpoint shrinks or expands in proportion to her courage.

We never know how high we are
Till we are called to rise;
And then, if we are true to plan,
Our statures touch the skies –

A woman who stands on a mountain of spiritual integrity understands her spiritual mission calls her to duty and her response is to commit. She is called to do what is for the highest good even when the multitudes disagree or digress to achieve what is meager in comparison. While others are comfortable perpetuating the attitudes of the status quo, a woman warrior forges a difficult path challenging cultural views. Though she may never be recognized by the world for her achievements in her day, she is satisfied knowing she did her best.