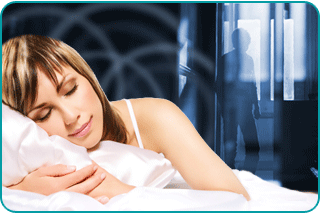 Dreams offer evidence that the human spirit lives on. Spirits residing in the heavenly realms can communicate with loved ones on earth, sometimes flooding their dreams with welcomed messages. It is not unusual for a dreamer to receive a surprise visit from a deceased friend, parent, spouse or other relative shortly after their passing. It seems that they want the dreamer to know that they are in a good place, happy and at peace. Usually these visits will help reconcile the dreamer’s feelings of loss and quell their grief.

Through a hidden doorway or veil, the dreamer may be led into a room filled with light to be greeted by their loved one. The spirit may hold out their hand to offer a symbolic gift or communicate a brief message that is usually meaningful to the dreamer. Or they may just appear in familiar surroundings with a smile on their face. Most will appear as they did in the prime of life, youthful and full of aliveness, as if all the suffering from the incarnation had been lifted.

A man I will call John woke from a dream that he described as transcendent. It was a loving communion with the spirit of his wife and soulmate who tragically died 10 years before. He could feel her embrace and no words could describe the intensity of love that infused him. This was the closest encounter with her spirit he could remember and the memory of the dream clung to his heart. The encounter raised his consciousness and instilled in him new faith and certainty of an afterlife. He recognized that his wife’s love for him could never evaporate. It was eternal.

Shortly after that experience, he met a woman who shared her own story of continued communications with her deceased husband. Her husband, who had been deceased for 25 years, still showed up in her dreams frequently. John said talking with the woman validated his experience.

For the bereaved, a spirit visitation will produce a measure comfort and the assurance that their loved one is not far away. I heard a dream recently from a woman whose fiancé had died suddenly. She dreamt that he rode up in the back of the pickup truck that belonged to a mutual friend of theirs. She climbed into the back and asked him why he hadn’t come home. She mentioned that she was exhausted from trying to find him. He covered her with a quilt as a comforting gesture.

When there has been unfinished business, a spirit may not be able to rest until they have communicated something important. Not long after my mother’s passing from what was initially attributed to natural causes, heart failure, I received a haunting dream that communicated a great deal more about the events surrounding my mother’s death than were first reported. I was told that she must have had a heart attack while driving in her car and pulled into the parking lot where a trauma care nurse as well as another witness just happened to be standing. In the report, the extensive damage to the car was attributed to the likelihood that she hit some bushes coming into the parking lot, despite the fact that none of the witnesses could testify to that detail.

About a month after my mother’s passing, I had a haunting nightmare in which I lived the moments before my mother’s death from her perspective. The dream revealed that on her way home from the store a car suddenly pulled out in front of her car causing her to swerve and hit a parked car. She regained control of the car, frantically drove another two blocks and pulled into a parking lot suffering with chest pain and shortness of breath. She died in the ambulance on the way to the hospital. My dream represented the infusion of my mother’s memory into my consciousness. She was delivering needed information. With these new details, the police were able to locate the owner of the car she hit and I was able to collect on an accidental death policy.

Spirit dreams can offer a bit of information about the transition from this life to the next. A dreamer reported a dream in which her friend, who had passed about a month prior, drove up to where she was standing in front of her home and greeted her with a smile. She held up a newborn baby, symbolically communicating that she planned to reincarnate.

While some dreams of the deceased are truly spirit visitations, others appear to be the creation of the dreamers’ subconscious desires to be reunited with their loved one. Some dreams of this nature seem to revisit memories of happy times shared. For instance, sitting around the dinner table or taking a trip together in the car as if the person is still very much alive and continues to play the part they played in the dreamer’s life. These dreams temporarily reconcile the loss the dreamer may feel.

A true spirit visitation dream supports the notion that a loved one is never far away, guiding and contributing to the life of the dreamer. It eases the longing for re-connection and inspires faith in God and in an afterlife. Guiding souls are not on a spiritual platform above us looking down but are invisibly amongst us blessing us daily with their love and offering a helping hand.