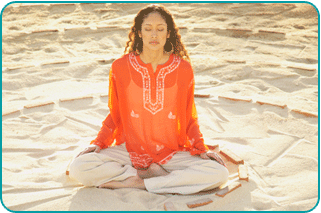 There are countless spots on the planet considered powerful, sacred, and holy. Power spots such as the Great Pyramids of Giza, the prehistoric megalithic structure of Stonehenge and the ancient Inca ruins of Machu Picchu in Peru are some of the most popular destinations of pilgrims seeking spiritual transformation. If you have had the chance to visit one of these spots, you undoubtedly have a story you’ve told at least a hundred times.

From geological wonders like Spider Rock in Canyon de Chelly, Arizona and Ayers Rock (Uluru) in Australia to architectural wonders such as the 12th and 13th century cathedrals strategically positioned on the Rose Line in Europe, sacred spots are spectacular to the eye and touch us beyond the senses. When we visit, we gain entry into a rich history of spiritual heritage and are pushed through a portal into what mystics and spiritual seers deem divine territory.

Sacred spots can produce peak spiritual experiences for those whose intention it is to open to the energies that infuse the area. Travelers on pilgrimages experience visions, heightened consciousness, transcendence, heart opening, and healing. The transformative nature of the energies ignites the higher mind, soul and spirit of the individual and opens a window into unseen dimensions. The experiences are often described as magical, otherworldly, transformative and meaningful.

The term “power spot” is said to have originated in the 90’s when a well-known Japanese psychic named Kiyota Masuaki, coined “power spot” to mean a place where the earth’s energy can be collected. However, spiritual portals, vortex points as well as the intersections of the planet’s energy grid lines have been recognized as “power spots” for centuries.

Power spots to indigenous tribes are often designated as sacred ceremonial land because the area is rich with spiritual tradition. The mythologies and legends of the tribes passed down generation to generation often tell of the site’s importance. Also, there are those places considered holy by religious traditions such as the Temple of Jerusalem and healing waters of Lourdes. The energies have built in these places over time because for centuries people gathered in prayer, ritual and ceremony raising the vibration of the area. Those energies can be experienced by those whose hearts are open and especially by those who have a well-developed psychic sense. With the heightened consciousness catalyzed by the energies at a sacred spot, new potentials emerge from deep within the soul. The shift can be life-changing and long-lasting.

If you are called to visit one of the hundreds of sacred places on the planet you’ll want to rely on more than a guidebook to make your journey memorable and a transformative experience. Here are some enlightened basics for making the most of your experience:

If you are planning to visit a sacred spot, whether you consider it a serious pilgrimage, a vision quest, or just a needed vacation, give yourself ample time to explore both the visible and invisible realms and to soak in the energies. The more time you spend the more likely it is that you’ll have a peak spiritual experience.