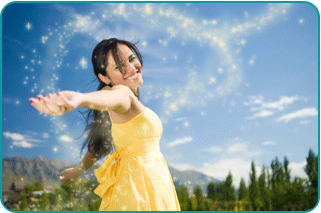 When you awaken spiritually, it’s a brand new world. Your eyes light up at the beauty in everything and your heart opens wide embracing all that is before you. The light has been turned up and everything is bright including your attitude. You have transcended! No, you’re not in Kansas anymore. You are in a land of your soul’s design and it is a magical place holding the promise of fulfilling your dreams and bringing meaning and spiritual purpose to your life.

Yes, magic is afoot and at first you step awkwardly trying to make sense of the shift in your consciousness where your many of your thoughts and desires oddly manifest before you. When I awakened spiritually back in the 1980’s, I immediately became aware that what I was contemplating or desiring magically appeared in some form or another, sometimes as fast as a blink of the eye. I was planning to move to Northern New Mexico and thought it would be nice to have a four-wheel drive vehicle instead of my Mazda sedan to travel the unpaved roads in Taos. That very day, every time I pulled into a parking space there was a blue Toyota four-wheel drive truck in the next space. Or if I pulled up to a stoplight the same model and color truck pulled up in the next lane. It happened with such frequency that my mind could hardly wrap around all of the synchronicity. I wondered what on earth was going on. In the next weeks, the synchronicity continued, but still the meaning of the blue Toyota truck synchronicity was veiled until one fateful day. I was traveling on the freeway into San Francisco when I spotted a billboard that read, “Test Drive Your Creative Power – Drive Toyota.” It was an “ah ha moment”. I realized I was being coached to master my creative power and interpret the creative field of signs and synchronicity around me.

Expectation gives rise to creation. If you are like most people these days you live in a cell phone bubble. You are probably on the phone a good part of the day, taking business calls or merely chatting with family and friends. No. you don’t want to miss that call because it seems like your life depends on it. So, there you are at the supermarket standing in line between to people you barely notice who could have changed your life or at the very least inspired you had spoken to them. For instance, this morning I stood in line at a convenience store and the gentleman in front of me remarked to the clerk, “I’m cruisin’ on faith.” I told him that was a wonderful statement and he pulled out a little booklet from his shirt pocket titled, Positive Thoughts. He told me that he reads the positive affirmations throughout the day to remind him that what he thinks matters. I just knew the man had appeared in the creative field of this day to offer a bit of inspiration for this very article. It was a magical and meaningful encounter. Ignore what your parents told you. Talk to strangers each and everyday. They were magnetized to you for a spiritual purpose.

Belief in a supernatural power, call it God, the Universe or the Source is what we call faith. Besides relying on the stream of consciousness of your own thoughts, the more faith you have in a supernatural power the more magical proof there is that you are not alone. You are co-creating magic with this source as well as the guides that serve your heart and evolution on your journey towards spiritual mastery. I like to play “road oracle” every time I am in my car, cruising around reading license plates of the vehicles that are in front, in back, and ones that zoom past me. When I looked out the window a few moments ago, there was an RV that pulled up in front of my house. The man got out of the drivers seat walked to the back of the RV and made some kind of adjustment on the license plate. I had to run out to read the plate, which had the initials of my guide along with numbers that were personally meaningful. Furthermore, the symbol of the RV could be interpreted as, “Wherever you travel, you are home.”

Raise the Magic Bar with Love

Love synergizes magic and much more. The more love you hold in your heart, spread around to strangers, give to those who love you or to those who need your helping hand, raises your consciousness even more. One Easter weekend, I arrived at the bank just as it was closing. I was at the ATM withdrawing some cash when an elderly woman in her 80’s marched up to the door banging and demanding they open up for her. She was panicked because she had no cash or food at home for the long weekend and was pleading with the manager to please help her. But he denied her entry. I asked her if she had an ATM card, but she explained that she didn’t use one. I noticed she only held a savings account registry in her hand. I pulled out a twenty-dollar bill and gave it to her with a smile. She was grateful beyond words. Another woman who also overheard the woman’s pleas walked up right behind me and handed her another twenty. She said, “Have a happy Easter.” The old woman nearly fell to her knees rejoicing and praising Jesus. I thought it funny that she gave Jesus the credit, but understood it was how she interpreted the miracle that had brought her a rescue in her time of need. Three soul sisters had collaborated in a field of love to bring meaning and purpose to each other’s lives that day. One act of kindness magically leads to another.

Managing Your Power as a Sorcerer’s Apprentice

Mastering magic can be an unruly, chaotic and overwhelming experience, when one’s spiritual power has peaked and the rules and limitations of the 3rd dimension have gone out the window. You may have to draw out your macro-management skills to manage all you create. Life will appear as a dreamscape with a lot of signs and symbolic information to decipher and you will have to learn a whole new language to understand your guidance. Some of what is magnetized to you will bring you closer to your destiny while other things manifest to temp you and plummet you to spiritual defeat. All is for the sake of your spiritual improvement. Like Mickey Mouse as the sorcerer’s apprentice in Fantasia, you shouldn’t dream too big or beyond your abilities. In the tale, Mickey, thinking he has mastered the art of sorcery, borrows his mentor’s magical hat and commands a mop to do his clean-up work. The result is a flood of water that almost carries him a way. Mickey had to realize there are no shortcuts to greatness.

The magical playground of life will bring you many opportunities to serve and delight in all that can create for the greater good of all. You have only to realize your thoughts deserve action and that your dreams will only come true with some effort.